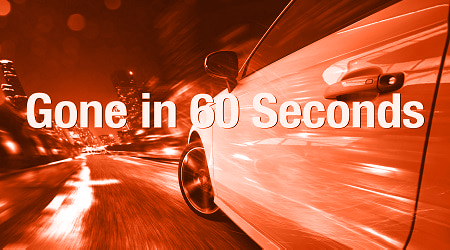 Financing a car is easy. You pick out your brand-new car. You walk into the finance manager’s office. You give your name, address, social security number and a few other pieces of personal information and you can walk out of the auto dealership with keys to that car, sometimes with little or no money down.

It’s fast and it’s easy. Car manufacturers like it – it allows them to move product quickly. Car dealers like it too, they can put more consumers in cars and make money fast. But fraudsters like it, too, and have been increasingly gravitating to the easy financing in the auto market. It’s the reason auto lending fraud has been rising in the US for the last five years.

Since 2003, reports of auto theft have gone on a decades’long decline in the United States. There were more than 433 car thefts per 100,000 people in 2003. Today, the number of thefts has dropped to 215 per 100,000 people.  That is a reduction in car thefts by over 50%.
Car manufacturers Investments in technology to to reduce car thefts are paying off big time. Engine immobilizers, LoJack, keyless entry, and a host of other advancements have virtually wiped out car theft across the US. The only cars being stolen today are older cars that don’t have the advanced technology. In fact, the most stolen car in the US is the 1998 Honda Accord.

We know criminals always shift their strategy to keep rolling in the money, so where have they invested their time to keep cars rolling in?
According to analysis by PointPredictive, it appears they are getting those cars through fraudulent applications and financing. While car thefts have declined, auto finance fraud is making a long steadily increasing climb upward. Up to $6 billion in originations each year contain misrepresentations and fraud. It appears auto finance fraud has become the thieves’ preference for stealing cars.

And it’s not only PointPredictive sounding the warning bells on increasing auto finance fraud. In 2017, UBS published a study which found 1 in 5 borrowers admitted their auto loan applications could contain inaccuracies. This spells bad news for banks and lenders that rely on application information to be factual in order to approve loans. UBS was so concerned that they indicated, “something is going on under the hood, it’s not just smoke and mirrors anymore.”

Auto lending fraud is less commonplace elsewhere on the globe

While the US is experiencing high levels of auto lending fraud, other countries do not appear to have the same problem. According to GBG, a leader in global identity intelligence, the UK car market experienced a surge in auto lending, yet the levels of application fraud actually dropped.
Additionally, according to CIFAS, an independent fraud prevention service, application fraud dropped 23% despite a 2.1% increase in overall fraud levels. They point out that the difference in the UK market is that auto lenders have spent a significant amount to bolster their defenses against fraud.
GBG noted that this isn’t down to restrictive lending but a huge push by the automotive sector in recent years to detect and fight fraud. They attribute much of this has been a focus on bolstering the UK’s anti-fraud infrastructure. Information sharing (including data consortiums) has increased, and there is greater co-operation between police and trade associations.

If the US experience is any indication of global experience, however, much of the auto lending fraud that occurs is often buried in bad debt and may not be known to a lender for months or years after the initial application is approved.

In the US, one of the primary reasons that fraud has escalated might be due to the nature of the loan process itself. Because consumers often are not working directly with the lender but rather an intermediary, the system can be ripe for fraud either by the consumer themselves or in some cases the car dealers. In fact, most lenders believe that both consumers and dealers perpetrate the fraud they experience.
Each year 85% of car purchases in the United States involve a loan. Currently, over 107 million consumers have auto loans and car dealers work directly with lenders to facilitate most of those loans. That makes for a lot of loans that could be targets for fraud.
In a 2018 PointPredictive auto lending survey, lenders revealed that up to 70% of their fraud losses could be perpetrated or facilitated by the dealer, the rest by the consumers themselves. Consumers that default are often surprised to find out exactly what information was relayed on the application about them that wasn’t true. In many cases, the dealer was just trying to get the deal done and they were intimately familiar with what policies the lenders had in place. Dealers can often act as shepherds in the process guiding or coaching borrowers how to get the loan approved.

Most common misrepresentations and lies that lead to default

1) Income inflation scheme – They misrepresent the income by inflating how much they make so they can qualify for the loan.

2) Second income scheme – They misrepresent their income by supplying a second fabricated income so they can qualify for the loan.

3) False job scheme – They misrepresent their employer so their true income will not be discovered.

4) Years on job scheme – They misrepresent how long they have worked at an employer so they can qualify for the loan.

5) Inflated occupation scheme – They misrepresent their occupation or job title so it seems like they make more money than they actually do.

6) Fake work number scheme – They supply a false work number so calls to verify employment are routed to a friend, relative or even a fake reference site like careerexcuse.com

7) Fake business scheme – They claim to own a business but create a fake business that does not exist and claim to make an exorbitant income.

8) Car value inflation scheme – The car dealer inflates the value of the vehicle so they can get more money from the lender than the car is worth.

9) Powerbooking scheme – The car dealer creates fake options on the car like upgraded sports wheels, GPS and other features to inflate the value of the vehicle to get more from the lender than the car is actually worth.

10) Fake VIN/ phantom loans scheme – The car dealer creates a phantom loan by using a fake VIN number or a VIN number of a car they are not selling and pockets the money from the loan for themselves.

11) Odometer rollback scheme – The car dealer rolls back the odometer so the car has less mileage on it to defraud the consumer or they misrepresent the mileage on the car to the lender to make the car appear to be worth more.

12) Title washing scheme – The car dealer disguises the fact a car has been salvaged by bringing the car to a new state and washing the title of the salvage or problem history. Later on the dealer can sell that car at a significantly higher price.

13) Lie about true name and identity – A fraudster fills out the application using someone else’s identity completely.

14) Create a synthetic identity – A borrower creates a new identity using a combination of a fake and real information to establish a new credit bureau record that hides their true identity and credit history.

15) Use a straw borrower – A borrower or fraud ring recruits an individual with good credit to act as a front for the transaction called a straw borrower. When the car is in their possession they turn it over to the fraudster in exchange for a large payment.

18) Stack loans quickly – Borrowers or fraudsters will quickly apply for multiple auto loans in short succession before the credit bureaus update. Also called “bust out”, their objective is to get as many auto loans as possible before they are detected.

19) Forged paystubs – Up to 10% of paystubs that lenders use to validate a borrower’s income are generated on the internet and are in fact false.

20) Forged bank statements – Borrower’s, dealers and fraudsters will provide fake bank statements to lenders to falsify their bank balances or deposits in order to qualify for the loan.

22) Forged Social Security cards – Synthetic identity fraudsters will often forge a copy of social security card to support the fact they own a social security number when it is in fact a stolen CPN they purchased or obtained online.

23) False payments – After the loan is approved, fraudsters will mail bad checks to pay off the loan in hopes that the lender will send a release of lien to them so they can quickly flip the car for sale and make profits.

24 )Mechanics’ liens – Unscrupulous mechanics will often recruit down and out borrowers that want to stop making payments on their loans. The mechanic will file phony mechanics liens on cars in hopes that the lender will release their interest in the vehicle so they can take possession of the car.

These are just the most common of the many ways that lenders are defrauded by fraudsters, consumers and dealers.

Author: Frank McKenna
Frank McKenna is Chief Fraud Strategist at PointPredictive, Inc. Frank is an advocate for fighting fraud and has worked with more than 100 banks, lenders and companies throughout the world, designing strategies, solutions and operational practices that help them reduce costs and increase efficiencies. Connect with Frank on Twitter @frankonfraud.