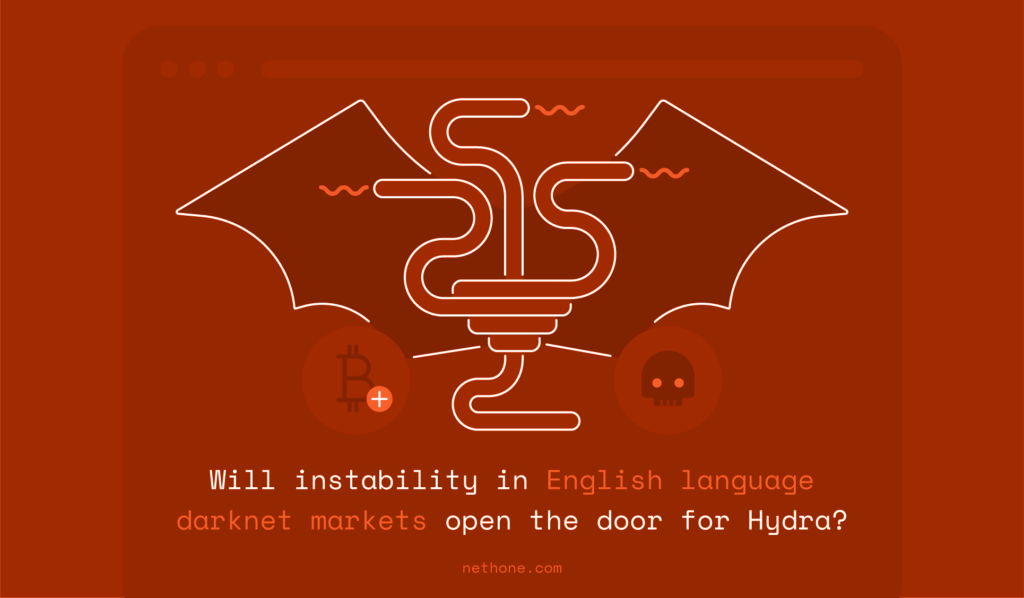 Will Instability in English Language Darknet Markets Open the Door for Hydra?

Hydra is currently the biggest Russian language DarkNet Market (DNM). It is also much older than any existing English language DNMs. In December 2019, the Hydra crew announced the creation of several new projects, the most important of which are Eternos and AspaNET. The former is a new DNM for English-speaking crooks. The latter is a new Darknet that will be an alternative to TOR. The Hydra crew initially planned to launch new projects in September 2020, but in June they postponed it for an unspecified time because of the COVID-19 pandemic. Given the events in the English speaking sphere of TOR during the last 18 months, current instability among DNMs and uncertainty among Darknet users, it could be an opportune time for a new player to take the stage.

If the new Hydra market does indeed begin operations, it would become a significant part of the cybercriminal environment in the English language sphere. There is huge momentum behind the Hydra crew and the present moment is perfect to take over a large part of the illicit market on the Darknets. Other cybercriminal groups will have to react somehow to the new competitor. Will they cooperate, compete, or go to war?

It is also possible that these new projects won’t launch (or they will be operating only partially) and that Hydra’s Initial Coin Offering (ICO) was only a fraud targeting the Darknet community.

Currently, Hydra is well known as an illegal drug-focused DNM. They are especially well known for using secret GPS-marked hiding places as a delivery method.

On Hydra, one can buy not only illegal drugs-related merchandise, but also fraud-related: stolen credit cards (both dumps and fullz), sim cards, electronic money wallets, stolen accounts and counterfeit money. The number of their fraud product providers is much smaller than drugs suppliers, but they all are verified and trusted vendors. Because of this, there are almost no problems with fake merchants as is often the case on other DNMs.

In December 2019, the Hydra crew announced an Initial Coin Offering (ICO) to gather funds for launching several new projects. The most important is Eternos, which is a new DNM with global reach, and AspaNET, which would be an alternative to TOR. Hydra attempted to sell 1,470,000 tokens, with each token priced at $100.

Eternos will be accessible in English and possibly in other popular languages. Their purpose is to create a large, stable, and secure DNM that will be an alternative for Western DNMs. The Hydra crew promises that the new DNM will be based on Hydra, and will include their GPS delivery system based on drug caches known as закладка, but it will also feature encrypted messaging and a built-in cryptocurrency mixer. The second core project, and maybe even more important than Eternos, is the new Darknet–- AspaNET. The Hydra crew is probably powerful and rich enough to create their own Darknet, as even smaller hacker organizations managed to do so. Eternos will be available on AspaNET, but it is uncertain if it will also be available on other Darknets (like TOR and I2P) or if it will be an AspaNET exclusive.

The English language sphere of the Darknet has been in flux since at least March 2019. Over the last 18 months, 15 English speaking DNMs stopped operations. Some were busted, others stole their customers’ money and did an exit scam; the rest disappeared because of other or unknown reasons. Right now the oldest English speaking DNM is Empire which is 3 years younger than Hydra. Given the instability in Western DNMs, both Darknet vendors and customers will try Eternos. Even crooks who don’t speak Russian have heard about Hydra and their domination on the Russian TOR segment.

Eternos and AspaNET should be launched in October 2020. Will Eternos become the market that makes DNMs great again? Will AspaNET become an alternative to TOR among cybercriminals? Or is this just a big scam? It remains to be seen. In any case, it is certainly worth continued observation.

Nethone’s Timeline of the Biggest English and Russian Darknet MarketsDownload

Author: Michal Barbas
Michał Barbaś, Intelligence Specialist at Nethone. He has 7 years of experience in fraud and competitive intelligence in IT business and consulting companies created by former intelligence officers. He also worked as an analyst for The Polish Government Centre for Security. Specialist in OSINT, Darkweb and various types of fraud.
Scroll To Top