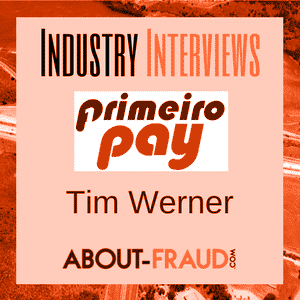 Tim Werner is a German living in São Paulo for five years who believes an on-going local presence in the market is the key to providing the best solution for international merchants. Before Werner co-founded PrimeiroPay, he was working in other leading companies such as Boku, mopay and InnoGames. PrimeiroPay is a payment service provider focused on Brazil that is connected to all the major credit card acquirers in that market as well as local payment methods such as boleto bancario. Brazilian merchants prefer to use PrimeiroPay to avoid any tax burden or foreign exchange fees and issues that would arise from using a foreign-based PSP.

RS: When was PrimeiroPay founded and why did Brazilian merchants need a local payments service provider (PSP)?
TW: PrimeiroPay was founded in early 2014 with the goal to provide a local shopper experience for international merchants that do not want to deal with local bureaucracy.
Brazil has some specifics that you can only cover by choosing a local PSP, besides which local acquiring increases card acceptance rate significantly around the globe.

Whenever a transaction is conducted in a foreign currency, Brazilians are subject to taxes (not card fees!) of 6.38% of the transaction amount. If your online shop is priced in U.S. dollars (USD), you might lose potential customers and they will buy the product or service from your competitor. Additionally, payments in installments are extremely popular and represent 80% of all transactions in the travel industry here. Installments can only be used in Brazil when you acquire domestically.

RS: What value-add does PrimeiroPay offer its merchant clients compared with other competitors?

TW: We believe that the experience for the shopper and the merchant has to be identical to the one they are used to experiencing. That means the shopper wants to be able to pay in installments while the merchant ideally uses the same payment setup globally. At PrimeiroPay we take care of localizing the checkout, offering installments and also take away all the domestic challenges facing the merchant.

A big challenge that often is not being tackled by the respective departments at a merchant is foreign exchange costs. Our unique FX products allow the merchant to keep their USD pricing while PrimeiroPay guarantees a 24-hour exchange rate for 12 different currencies against Brazilian real (BRL). The merchant has zero risk of losing part or even their entire margin due to currency fluctuations.

The BRL has a daily variance of more than 1.50%. If you assume a merchant’s gross margin is 10% of the sales price, a 1.50% variance can eat up the whole profit margin or even cause losses.

RS:  Beyond accepting local-only credit cards, how does having a local acquirer help merchants’ acceptance rate in Brazil?

Installments are the key to success and that includes basically any industry in Brazil. The travel industry has a high average ticket price, but we also see higher conversions in industries like videogaming when the shopper has the chance to pay in five or six installments for their virtual goods.

RS: How do the 40% of Brazilians without bank accounts shop and pay for goods online?

TW: The answer is boletos, i.e. money orders, which are a system that was introduced decades ago. Any bank can issue boletos and boletos of any bank can be paid at any kiosk, ATM or bank branch. It’s basically a cash-based method with the big advantage of zero chargebacks for the merchant. Boletos are a very commonplace method to pay your utility bill in Brazil.

PrimeiroPay has also launched paysafecard earlier this year in Brazil, which operates as a pre-paid paycard in place of boletos. paysafecard is extremely successful in over 40 countries worldwide. We believe that unbanked people will be the main target of paysafecard to shop goods online.

RS: What challenges does the use of boleto bancario present to foreign merchants that seek to operate in the Brazilian market?

TW: Boletos are commonly used and trusted by Brazilians as I previously explained. The biggest challenge is the asynchronous payment confirmation. The boleto is issued by the PSP and then paid later by the shopper. In the best-case scenario, it takes 24 hours between issuance of the boleto and the payment confirmation. If there is a weekend in between it can even take a couple of days until the PSP can confirm the success of the payment to the merchant / store.

That also means that boletos are not suitable for every industry such as airline ticketing or hotel reservations. We see that boletos represent 20% of sales volume in industries like videogaming, e-learning and other forms of e-commerce.

The launch of paysafecard helps to tackle the above described challenge. paysafecards can be paid at 100,000 point-of-sale (POS) locations throughout the country. paysafecard contains a 16-digit pin code that can be entered and then redeemed at the merchant’s store and the confirmation of the payment is instantaneous. It’s a kind of reverse boleto flow.

RS: Do installment-based payments create special difficulties in fraud prevention in Brazil or in general?

RS: What e-commerce fraud issues are most prevalent in the Brazilian market?

TW: It does depend on the vertical, but friendly fraud has been an issue in Brazil. We have our own team that collects evidence on social networks to successfully dispute chargebacks due to friendly fraud. We have seen success in cases in almost every vertical when social media evidence was provided. This can range from a check-in on Facebook at the hotel the shopper has booked or posting pictures on blogs that indicates the service was being used.

RS: Does the economic slowdown in Brazil translate to increased levels of fraud (greater motivation for criminals) or decreased levels (lower absolute level of transactions)?

TW: That’s a very controversial question to discuss. We do not see any relation to it, but this might also depend on the merchant verticals. Many digital services should be considered as luxury goods which are in any case only accessible to a limited number of people. Brazil has been going through many economic crises in the past 20 years. The total number of people in Brazil that are able to afford certain luxury services and goods is still a lot higher than the total population of many European countries.

RS: What fraud prevention advice would you offer any foreign merchant seeking to enter the Brazilian market?

TW: We support our merchants in finding the right setup in Brazil. Physical goods should be always sent with tracking and a signature requirement. The travel industry has been working with us successfully on disputing chargebacks by collecting evidence on social media channels.

As interchange rates in the Brazilian market are significantly higher than in Europe, we also accept only cards that were issued in Brazil. This not only helps the merchant to decrease chargebacks, it also saves a lot on the cost-side as transactions are not being acquired in Brazil at much higher costs than elsewhere.

Friendly fraud is a problem – the major anti-fraud solutions (Kount, RedShield, etc.) provide good tools to decrease chargebacks and fraud. We treat each case individually and try to find the right balance between high acceptance rates and effective fraud prevention.