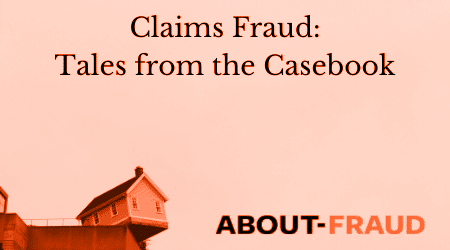 Claims Fraud: Tales from the Casebook

According to the UK Association of British Insurers £1.2 billion of claims fraud was detected in one year.  They have previously said that 2 out of 3 fraudsters get away with it so the cost of undetected fraud is in the region of £3 billion.

Like most 21st Century fraud investigators I rely on the internet, open source intelligence, databases, and analytics to gather the evidence I need to confirm whether and fraud has taken place and who has committed it. The old days of relying on interviewing witnesses and suspects still exists but is not relied upon as much as evidence gathered via data matching data mining, machine learning and AI. The past 2 decades have seen lower value claims switch to desktop to reduce costs. Events like the pandemic have also seen an increase in remote interviewing, self service apps for claimants to provide information.  All good stuff and the right thing to do.

I was used to interviewing people in police stations, but when I began working for insurance companies, I entered a world where most people are interviewed in their own homes.  I found that genuine people were far more relaxed on their ‘home’ ground and that made things easier for them.  I also found however that being in someone’s home provides an advantage when interviewing a fraudster including:

I can give specific examples where claims fraud was thwarted by visiting a claimant in a way which would never have occurred using apps, web links or the phone.

I was on a surveillance operation which all wrapped up well and was heading back to the office in Manchester.  The job next day was to conduct an interview with a policyholder who had an escape of water claim for his Victorian home in a Manchester suburb.

I was unfamiliar with the area and decided to check out the location to avoid any delays the next day.  We found the house.  The front door was open and a man who we later confirmed was the policyholder was stood in the doorway.  He had a hosepipe in his hands and was spraying water into the hall and stairway.

We watched for a while and switched on our recording equipment. I like to keep things simple.  So, I went to his gate and said ‘Hello, can I have a word?’. He turned and glanced at me but continued to ‘water’ his hallway.  He said ‘No mate, I am busy and I’ve got some bastard from the insurance company coming tomorrow’

Honesty is always the best policy, so I said ‘Actually, I am the bastard from the Insurance Company’ Ever seen a scalded cat?  Ouch!

I made it through the snow and arrived at a pleasant house to interview a policy holder whose car had been reported as stolen.  His wife had been the last user, but at the last minute she was not available due to a family issue.

I was made welcome and provided with a hot mug of coffee.  We were sat at the dining room table which I prefer when interviewing, and all was well as we went through the paperwork, keys etc.  Then I met Lily (name changed).  A precocious and delightful 6 years old, who was full of energy.  Dad did not cope so well with her, and she refused to go and watch TV in another room.

I spotted that she liked Peppa Pig from various toys and books that were around the house. To help, and because I like kids, I gave her one of my notepads and asked her if she could draw Peppa Pig for me.  Dad and I got on with the interview.  That kept her quiet for 5 minutes or less.  I then asked her to draw Daddy’s car to keep her occupied again.

She proudly showed me a picture of the car with 2 stick people standing next to it.  I asked is that Mummy and Daddy?’.  ‘No’ she said ‘that’s Daddy and the man who bought it off him…’ Daddy immediately decided to withdraw his £25,000 claim.

The above are true stories from my own casebook. Technology is the key as is well trained investigators who know what to look for, and how to deal with validating and repudiating claims.  My view is that less visits is inevitable, so we must make sure they are used properly and not just as tick box exercises to gather information that could have been sent via email.  The home visit is still the most reliable way of being sure whether a claim is genuine.

Author: Peter Taylor
Peter Taylor began his career with Greater Manchester Police as a CID officer specialising in fraud investigation. He started his own innovative and successful insurance investigation business and went on to be the Head of Fraud for Major Loss Adjusters. 6 years ago, he went into consultancy expanding his areas of operation to all financial and cyber-fraud across insurance, finance, local government and retail. He brings together vast experience of criminal investigations, behavioural psychology, and delivery of successful counter fraud strategy. He provides talks, training and workshops across claims fraud, cyber fraud and workplace fraud. Peter is an Accredited Counter Fraud Specialist, a member of the International Association of Auto Theft Investigators, and a member of Chartered Institute of Loss Adjusters.