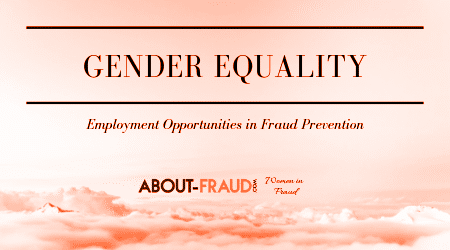 Have We Found the Way to Gender Equality in Fraud?

My hunch is that the answer is yes. However, I suspect this may be skewed by the high proportion of women in my own work environment at Riskified. To see whether this strong impression could be empirically validated we need to look at some objective data.

By way of comparison, when I started working at Riskified five years ago, 40% of the members of the Fraud Analytics team were women. Today, women make up roughly half of the team.

So, at least at my own company, there are more women in fraud prevention compared to their average employment in either high-tech companies or in law enforcement. The reason why that is, requires us to delve deeper.

How gender equality is achieved

Let’s take a look at both the individual work requirements and the fraud prevention industry as a whole:

On the individual level, an important part of fraud analysis is understanding the behavior of the person sitting on the “other side.” In other words, you need to be able to get into the mindset of the person making the transaction to differentiate between a genuine buyer and a fraudster.

This might be part of the explanation for a higher female presence in fraud prevention. A recent study suggests that “females are, on average, more disposed to an empathizing style of thought— i.e., the drive to identify others’ mental states in order to predict their behavior and respond with an appropriate emotion”.

But attributing this to “gender traits” misses the full story. There are plenty of other industries that require these qualities, but they do not necessarily have higher rates of female workers.

It is my belief that in order to understand why fraud prevention has become a women-friendly field we need to understand the step before: what enables women to get into these positions, and how were any direct, or indirect obstacles removed. As I do not possess global market data, I will focus on the enablers I see here at Riskified.

Barriers to female employment in hi-tech

So what are the barriers?

Most tech jobs require academic degrees from fields where women are already in short supply. Yes, even today the enrollment levels of females within STEM (science, technology, engineering and mathematics) degrees is significantly lower. Leaving the “why is this happening” question aside for a minute – this situation is creating a preliminary hurdle to the presence of women in hi-tech.

In addition, most tech/research positions have long been perceived as more “manly,” and men still have a significantly higher presence in senior management. Although women have started breaking through the gender glass ceiling, the pervasiveness of the notion that the high-tech industry is a boys club can’t be denied.

Combining these elements together showcases the “Catch 22” situation we are in:

Do you see what I’m getting at?

So what happened at Riskified that helped overcome these gender barriers?

Online fraud prevention, as a relatively new field, has created an almost clean slate. As a young industry, traditional social barriers based on gender aren’t firmly ingrained and the hiring process isn’t tied to possessing specific degrees. The fraud prevention industry attracts people from various academic backgrounds, including humanities, social studies, STEM and more. This helps alleviate the barrier posed by the demand for specific academic credentials in hi-tech and in industry in general.

When asked, Rotem Amitai, VP HR at Riskified tells me explicitly what she and her recruiters are looking for when hiring fraud analysts and what factors the hiring managers use to consider and filter out candidates.

“We usually look for relevant education but that does not necessarily have to be a degree in computer science”, says Amitai. “We look for strong capabilities in analytical thinking, as well as the ability to think and act rapidly, strong attention to detail, creativity and logical thinking.”

Why does this lead hiring of fraud analysts at Riskified to be nearly evenly split between gender?

The future of fraud prevention

The fraud prevention industry strives for creativity. In order to understand the fraudster, empathic capabilities and analytical thinking are important. But in order to be one step (and ideally several steps) ahead of fraudsters, the industry needs to promote creativity. It must develop and promote the ability to think differently. While gender gaps are sometimes easier to spot, it’s not just an issue of gender. It’s also about embracing deep diversity, creativity, and queerness in order to achieve more success.