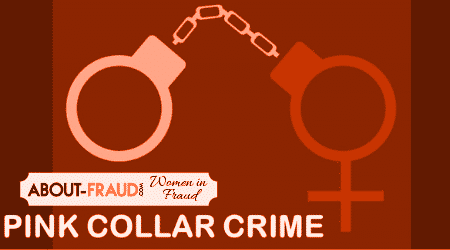 For almost three decades, Kelly Paxton has made it her life’s work to fight fraud. As a certified fraud examiner (CFE), speaker, teacher and domain expert, she uses her knowledge to educate individuals and businesses about the many facets of pink-collar crime. Kelly recently took a few moment to talk with FraudBeat and provide some insights into investigation strategy, tactics and the psychology behind pink-collar crime.

PJR: What is pink collar crime and how does it differ from other forms of fraud?

KP: Pink collar crime is primarily embezzlement by lower level employees, who are most likely females, in the workforce. It was popularized by Dr. Kathleen Daly in 1989 in an article in Criminology Magazine. It’s a play on the term white collar crime, which was coined in 1939 by Edwin Sutherland, and pink, which is traditionally considered a feminine color. In general, white collar crime consists of insider trading, Ponzi schemes and corruption. Most women are not in the types of positions that enable someone to commit those types of offenses. The reason pink collar crime is fascinating is that “regular and ordinary” people who have never committed a crime before will commit embezzlement. They’ve crossed the line after having lived all their lives by rules. I see it as good people making bad choices.

PJR: Considering embezzlement is the primary type of pink-collar crime, how do criminals execute their embezzlement schemes?

KP: Forged checks, unauthorized checks, wire transfers, cash skimming… it’s all about taking money out of a business for their own benefit. It can also be expense report fraud, ghost employees, benefit payments, and vendor fraud. The people who commit pink collar crime have the opportunity to steal due to their position and responsibilities. The roles that allow pink collar crime to happen include anyone in a financial capacity including but not limited to accounts payable and receivable, office manager, bookkeepers, receptionists, sales. Anyone who can access to the finances of a business are in a position to steal. A hashtag I like to use is #trustisnotaninternalcontrol.

PJR: What differences stand out between how men steal and how women steal?

KP: Women tend to have a glass ceiling when it comes to embezzlement. Women steal on average approximately 45-50 cents on the dollar. Women steal smaller amounts for longer periods of time. Men typically steal for the 3 Ws: wine, women and wagers. Women steal for the 3Cs: cars, clothing and casinos. Men are more likely to commit vendor fraud than women. Women initially may steal for family or security type reasons. In my practice, I see more women stealing than men.

PJR: What’s the most interesting pink collar crime case you have ever investigated?

KP: I worked a non-profit embezzlement case on the defense side. The executive director was accused of embezzlement. The case was brought to law enforcement due to a disagreement among board members. She was arrested and charged with several felonies. The case was finally adjudicated, and the parties settled all claims. It took almost 3 years to finish the case. Based on my experience working with the attorneys, witnesses and the defendant, it was a study in how not to run a non-profit and how to protect yourself if you work for a non-profit or are a board member of one. As a non-profit board member, you have fiduciary responsibilities. Not taking those responsibilities seriously can lead to board disagreements and potential lawsuits. You should not be on a board if you can’t put in the time and effort to do a good job. It’s not as easy as it may look.

PJR: How did you get your start in fraud prevention? What positions did you have along the way to where you are today?

KP: I started in finance and was recruited to work in customs in 1992. I worked at the U.S. Customs Office of Investigations in Seattle, Washington from 1993 to1998. I loved the work. I couldn’t believe that I got paid to do the type of work that I did, including surveillance, going through people’s financial records and arresting bad people.

I then continued to work for the federal government in the Office of Personnel Management, conducting background investigations as a contractor for approximately five years. It gave me the opportunity to meet people from all different walks of life. They generally were very forthcoming, and I learned a ton about all different kinds of people.

I then went to work at the Washington County Sheriff’s Office in Hillsboro, Oregon as a fraud analyst for their fraud identity theft enforcement team. This is where I became interested in embezzlement and primarily women embezzlers. All my suspects there except for one were female.

After the sheriff’s office, I worked as a certified fraud examiner/private investigator on my own for five years before I was recruited to Nike as an investigator in 2014. Sufficed to say, I did not enjoy the politics of corporate life.

Since 2016 I have been primarily speaking and teaching about fraud and ethics. I currently take on select cases that have a pink-collar crime angle currently. I have been incredibly lucky in my career to be able to tie all my jobs together. It has always been about money. Not my money, but how people make choices about money and I find that fascinating.

PJR: When investigating women, do you alter your tactics compared with how you deal with men?

KP: Yes. As a woman myself, I think it can be helpful when doing the interviews. I am very empathetic when it comes to these types of crimes. I have lots of examples in my interviewing background in order to develop rapport. Generally, these women have not been in trouble before. I use that to get them to open up. I also keep up to date on criminology research which can be useful. Most women confess quite quickly. They have a lot of guilt and know they eventually will get caught. You have to give them the opportunity to tell their story.

PJR: You write a lot, do interviews and are on the speaking circuit. What’s your favorite medium to spread the word about pink collar crime?

KP: I am known as the Pink-Collar Crime Lady due to my presentations. I love presenting to audiences of small business owners, auditors and fraud examiners. I love showing real life examples of how good people make bad choices in all different types of industries. I am also working on online courses currently for people who are not able to attend presentations.

PJR: If other men or women are interested in fighting pink collar crime, what advise do you have as the best career path?

KP: I recommend studying to get the Certified Fraud Examiner (CFE) credential. In order to become a CFE you have to take a four-part test along with having a certain amount of experience in investigations. I took the online study program. The material is fascinating. It includes financial transactions and fraud schemes, fraud prevention and deterrence, investigation, and law. My background in finance and law enforcement was also helpful. CFEs earn approximately 25% more on average than non-certified peers. I was able to double my hourly rate from being a private investigator to becoming a professional CFE. It has been financially beneficial. I consider it to be essential in promoting your business.

PJR: CBS recently launched a show called “Pink Collar Crimes”. How well does the show cover this type of crime in your opinion?

KP: The show did not accurately show pink collar crimes. Only two episodes were actual embezzlement cases. The first episode was about a female bank robber. Other episodes also had violent crimes including murder. The show was based on gender and not the type of crime. One of my hashtags is #itspositionnotgender. Men can be pink collar criminals. Unfortunately, it showed women in a poor light. They could have actually done research on what is a pink-collar crime instead of just saying it was female.

PJR: Outside of your work in pink collar crime, what makes you tick?

KP: Behavioral economics. People don’t make rational decisions. Seeing good people make bad decisions, especially when it comes to finances, intrigues me. Money is a tangible item yet many people really don’t understand how deeply these decisions can affect them, their families and co-workers. Joe Wells, one of the founders of the ACFE, states it well: Fraud is not an accounting problem; it’s a social phenomenon.

Author: PJ Rohall
PJ Rohall is a Fraud SME with Featurespace, a pioneer in Adaptive Behavioral Analytics. He also is a co-founder of About-Fraud.com.
Scroll To Top