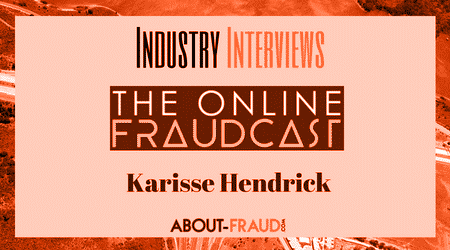 Fraud prevention consultant Karisse Hendrick joined with about-fraud.com contributor and ex-con Brett Johnson to launch this summer “The Online Fraudcast” podcast. Over the first few episodes, the duo discuss e-commerce fraud issues facing merchants and consumers with insights drawn from both the good guys and the bad guys along with a dose of humor. As part of its Q&A series, about-fraud.com discussed with Karisse some of the considerations that went into making the podcast and what listeners can expect from “The Online Fraudcast” in the near future.

RS: How long do you and Brett know each other? How did you meet?

KH: Brett and I started corresponding with each other in November 2016 when he connected to me on LinkedIn. I saw he had “ShadowCrew” on his work history and I was intrigued, but cautious. I had definitely heard of the infamous dark web forum.

At that point, he hadn’t had any consulting clients or speaking gigs, but he had just started a blog and I was impressed with his candor and information he was providing. In my part time role with CNP Expo, one of my tasks is to scout and hire keynote speakers and I had always wanted a former online fraudster to speak at the event, but I had never met one that was truly reformed. That started a three-month process of talking to him fairly often, vetting him through his references at the FBI and a couple non-profits he had started working with and verifying that he still knew current information about how fraud is perpetrated since he was arrested several years before. Fraud has come a long way since his arrest. In May 2017 we met in person for the first time at CNPExpo, where he was a keynote speaker. I’d like to think I was the first one to “discover” him, and I’m so proud of his work ethic and hustle over the last a year & a half!

RS: What motivated you and Brett to create “The Online Fraudcast?”

KH: I have to give my husband credit for the concept of doing a podcast together and for naming it. The day after I came back from CNP Expo in May 2017, I was excitedly telling my husband about meeting Brett in person and our dynamic on stage together. I wanted to work him in the future, but I wasn’t sure how or what would work. My husband had just started listening to several podcasts and suggest doing a podcast and jokingly said, “It could be a fraudcast!”

I shared the idea with Brett, and he loved it. There was a long learning curve for us to get it off the ground and we came close to releasing it a couple times, but we finally launched it a year after first discussing it. We love the podcast format because it’s very accessible to people all around the globe. To be honest over the last year we became really good friends and were talking about fraud practically weekly on the phone anyway, so it made sense to let other people listen to those conversations. Regardless of how many hours I’ve talked to Brett, I still learn something from him on every episode.

RS: Are there any podcasts in the industry or outside of it that either of you listen to that you consider an influence on how you produce your own podcast?

KH: My podcast subscription list is long and varied. The one other podcast I know of that is about fraud is the “Trust & Safety in Numbers” by Sift Science. I actually had the privilege of being their first guest! They have also been great at offering help and answering questions as we learned under fire to get our own podcast off the ground. The podcasts I listen to that are on completely different topics than ours still help me learn either what to do or what not to do on everything from how to create engaging advertisements to sound quality and the importance of a good outline and structure.

RS: Part of what makes your podcast interesting is the contrast between Brett’s criminal perspective and your knowledge of back-office processes and issues. What do you have to say to the people in the industry who are opposed to providing a venue for ex-cons to benefit from their past criminal experience?

KH: I’ve definitely gotten flack for this either from friends that are former law enforcement and remember who he used to be or from people on LinkedIn who I don’t know personally. I was skeptical at first too, and was very cautious in the beginning.

There’s a couple things I would say to the critics. First, the best way for an army to learn about a rival country’s strategies and objectives is to work with someone who has defected from the other side. I see working with Brett as a bit like that. I used to think I had a decent idea of the methodologies and tools that fraudsters used to defraud card-not-present merchants. After talking to Brett just a couple times, I realized I didn’t really have a clue. Secondly, I vetted him for over three months and have worked and become friends with him over the course of nearly two years. If this were a con, it’s probably the most boring and longest con there is. If it were still true that this is all just a long con, the amount of value Brett has provided to merchants through the podcast and through speaking and consulting engagements is well worth whatever he could possibly do with the information he’s learned in return. Last, Brett is one of the most genuinely remorseful people I’ve met. He owns up to everything he’s done and doesn’t romanticize it. Most people I know that aren’t truly reformed would still try to find excuses or blame their actions on someone else. He owns up to everything and is very honest about his mistakes.

RS: What is one area in fraud prevention that you think merchants that have yet to speak to a fraud expert get consistently wrong?

AK: Just one? Ha! I’m kidding, mostly. When I’m speaking at a conference, one of the main things I talk about is a company’s attitude towards fraud. Do they approach fighting fraud as fighting a dragon or a zombie. When someone is fighting a dragon, they assume there will only ever be one foe. They use traditional tools, kill the dragon and go back to their village to be celebrated. However, if you’re fighting a zombie, they regenerate and adapt to every tool you use, so you have to continually update your tools and processes. There’s no time to celebrate back in the village.

Many companies, especially when they start getting chargebacks, think fraud is a one-time issue. They think that if they plug the hole, they won’t have fraud again. Other companies think they can keep fighting today’s fraud with yesterday’s tools. You don’t necessarily need to be switching vendors often, but you should be evaluating their performance often and be open to adding additional layers or switching providers if some of your key performance indicators start to take a hit. Fraudsters are continually regenerating and adapting like zombies, so merchants need to do so as well.

KH: The situations in which I tell clients to outsource the chargeback responses are usually because the company does not have the resources to respond to chargebacks in-house or the volume is just too high to manage effectively. I feel good about making a referral when a chargeback management provider is able to respond to chargebacks systematically and provide the business intelligence that allows the merchant to see patterns that identify the root causes of chargebacks.

I am admittedly critical about some of the chargeback management companies out there today. The biggest reason for my criticism is because of the feedback I hear from merchants who expect these service providers to reduce their chargeback ratios. However, some of these companies won’t share that valuable information with clients because it goes against their business model. If you’re only getting paid when there are chargebacks, why would you help merchants reduce chargeback volume?

When asked to refer a chargeback management service provider, I only refer to a company that I have never heard a single complaint about and that I’ve met with the CEO several times to ensure my clients will be well taken care of.

RS: Are there any plans to increase audience participation in your podcast either by answering emailed fraud-related questions on air or by bringing in topic guests?

KH: Our biggest addition will be adding consumer focused episodes by early September. There’s been a lot of discussion between us and with our agents on how to increase our audience and better educate consumers. The customer of our customer is our customer, as they say. We’re hopeful that by educating consumers, we can help merchants and also decrease the number of victims to fraud methods.

As for the format, we do have a few special guests scheduled to be interviewed soon. We’re focusing on bringing on merchants and other industry experts who are not in the provider space to have real conversations about fraud operations that are vendor agnostic. This is primarily because we know that merchants and providers both want to hear more from other merchants on what they are doing to fight fraud.

RS: You’re a couple of episodes into your podcast and seem to have already a number of different topics for episodes in the works. For listeners with little free time, what is the one episode between now and the beginning of the school year that you would recommend to them?

KH: If listeners only have enough time to listen to one episode, I’d suggest our first merchant episode on the progression of a fraudster and the five stages of fraud. I think Brett gives great high level information on knowing where your business fits into the fraud economy that can be very helpful to all companies. I follow that up in the podcast with observations I’ve had when merchants first experience fraud on their platforms, using the five stages of grief as a reference.