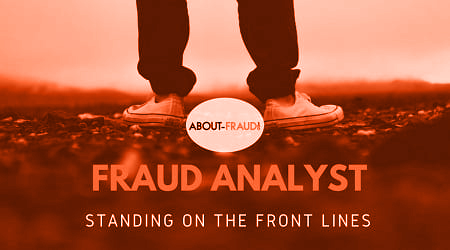 5 Things You Should Know About Being a Fraud Analyst

The demand for fraud prevention employees is booming with the rapid growth of international e-commerce. If you’re interested in exploring a new career in this fast growing and changing area, here are some things you probably don’t know about being fraud analyst but should.

1) They won’t teach you this in school

The reality is that there is no degree yet in fraud prevention at any college or university. I stumbled into fraud prevention almost by accident, when I worked in the back office of a foreign exchange site. I started handling the site’s fraud and chargebacks in addition to my regular tasks until my manager saw the value and let me do it full time. I have interviewed and worked with fraud analysts from all sorts of backgrounds during my time in this industry. I have seen analysts who were previously urban designers, lute players, biologists, drag queens, gender study PHD candidates – just about anything you can imagine.

This field is new and changing fast, so it’s more important to be someone who is curious and motivated rather than focus on a checklist of credentials. My first fraud analyst job at the foreign exchange site had a very simple rule-based system to detect fraud. From there I moved to the fraud solution provider Riskified and built several of the operational flows on the manual review side. Eventually, I managed a team that reviewed live e-commerce transactions 24/7.

A little over a year ago, I decided that I wanted to develop my technical skills a bit more and get involved in researching new types of fraud, so I moved to Simplex, a payment service provider (PSP) and fraud prevention start-up in the cryptocurrency space. The interview process at Simplex for fraud analyst roles is a lot of fun because it asks candidates to think like a fraudster and to consider how personal data is used when evaluating an online transaction. I have had candidates who didn’t pass the interview reach out to thank me and to tell me that they learned a lot just from the interview tasks.

At Simplex, I started in the company’s Analytic R&D team where they research and code risk based logic directly into the decision system using Python. As the company grew, the Research team became it’s own branch and I followed. Our team provides insights from both internal data and industry wide trends to keep us all aligned, a role that continues to fascinate me.

Moreover, while a degree in fraud prevention does not yet exist, Simplex is actually currently involved in designing courses for fraud prevention with several local educational institutions. However, we still plan on interviewing a candidates with a wide variety of academic backgrounds for the foreseeable future. If you think this might be an area that interests you give it a shot!

People often think that part of our jobs as risk specialists is to seek the help of or respond to law enforcement, but in practice that’s just not true. Part of the reason fraud detection and prevention work is so interesting is because national and international law is so far behind the reality in the fraud space. Even if there is an instance where we can point directly to the “bad guy,” the damage done to a victim does not even come close to the costs related to apprehending them and hiring a lawyer to file charges. As the fraud space evolves and things like carding and account takeovers become more commonplace the larger the gap with law enforcement will grow.

This can sometimes be incredibly frustrating, when you see fraudsters taking advantage of elderly or misinformed people through various social engineering tactics. All we can do is decline these payments and block the users, knowing full well the fraudster will just move onto a site using a less protected PSP and try again with the victim’s details.

Machine learning is for sure one of the most popular buzzwords in fraud prevention and tech in general over the last few years, but what does it actually mean? Matana, aren’t you afraid a robot will take your job? Yes and no. Yes, the robot, or decision models in my case, will take parts of my job in the near future, but that will allow me and the rest of our team to expand our expertise and focus on higher level issues.

Many resources in our team are focused around giving the models feedback about what happened to payments after decisions were made and adding new features for it to weigh and score. As our insights become more sophisticated and fraudsters find new ways to get around verification barriers we need more features, more feedback and more model retraining. So while the models do make complex live decisions, these decisions are backed by insights that only a human mind can provide.

From the guy in his mom’s basement to the ring of sophisticated users who have access to compromised legitimate cell phone numbers and KYC documents, there is no “same old, same old” in this space.The largest fraud segment we are fighting on an on-going basis is actually what’s known as friendly fraud, also known as chargeback fraud, when users dispute legitimate transactions. This type of fraud is hard to combat because it appears as a good transaction when looking at the data, since these users are giving us all their real information in most cases. There are several scenarios that fall under friendly fraud: Is it a user that didn’t recognize the charge as it appeared on his statement? Did a kid take his mom’s credit card without her permission? Did the price of bitcoin not move the way a buyer expected? There is an entire spectrum from purely naive to fully intentional disputes in this segment for which we are constantly trying to strike a balance.

Even though our COO, Ofer, is quite literally a rocket scientist, to be a fraud analyst you don’t need to be one. The truth is fraud prevention is more psychology-oriented than most people realize and has less to do with the natural sciences.

The best tip for getting into our profession is to read a lot about known fraud methodologies, and think about all the potential vulnerabilities that fraudsters might try to attack tomorrow. Our team leaders are looking for creative thinkers and a sensitivity towards virtual human behavior. It’s a rare combination of qualities and nearly impossible to teach. You need to have an open and flexible mind regarding the things that people do on the internet. Aside from that, taking a free online SQL course is a great start to becoming a highly skilled fraud analyst if this is a field you want to get into.

It’s not only the bad guys who have strange data. With the increase of globalization and freer movement of people around the world, we need to know how to treat a German who is in Southeast Asia for work differently from someone who is a local and is using a German credit card without permission. How do you differentiate between nearly identical user data? Come to an interview and tell us!

Author: Matana Soreff
Matana Soreff is a Boston area native who has been working in the fraud detection and prevention space for over 6 years. She is currently building the risk team at Melio.
Scroll To Top