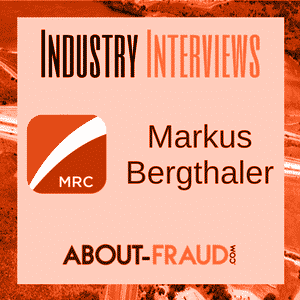 Established in 2000, the Merchant Risk Council is the leading global trade association for eCommerce fraud and payments professionals. About-Fraud.com caught up with Markus Bergthaler, Director of Programs, to find out how the MRC is helping educate and empower industry professionals. In this brief Q&A, Markus sheds some light on the various MRC events and initiatives, while giving his perspective on evolving challenges in online fraud management.

RP: How do MRC Platinum Events differ from other MRC events and fraud industry events?

MB: MRC Platinum Events are member only events and offer a much more intimate setting than MRC’s much larger spring events. They are targeted toward more experienced fraud and payments professionals and offer advanced content along with several discussion roundtables and networking opportunities.

RP: How does the European programming of MRC differ from the American MRC Events?

MB: Due to its smaller size and convenient travel options, Europe allows the MRC to offer more MRC Connects Events. These are smaller one day events held in different cities across Europe and offer local merchants the ability to network with their peers from other companies. MRC initiatives are largely the same in Europe and the US and Member benefits apply to members globally.

RP: What are the biggest fraud challenges facing MRC members across the globe?

MB: Friendly Fraud is a topic that continues to challenge MRC members and eCommerce merchants in general, especially digital and gaming companies. With the switch to EMV in the US, Account Takeover is also on the rise and a topic of increased interest.

RP: What do you hope is the biggest takeaway from any MRC event, whether it be a meeting or conference?

MB: Our hope is that every attendee is able to take away at least one best practice they can immediately implement. Something that will make an immediate difference to their bottom line, whether that be lowering their fraud rates or increasing customer acceptance rates.

RP: This year MRC is tackling the issue of data breaches. What can merchants do to better insulate themselves from the effects of large scale data breaches like what happened with Equifax?

MB: To this day, a lot of merchants still have the mindset of “it won’t ever happen to us”, which is a very dangerous mindset. Everybody is vulnerable in some way. Merchants should be proactive in making sure their systems are secure, their data is encrypted and they comply with PCI and PII regulations. There are quite a few companies who offer penetration testing, which is something that merchants should also take advantage of.

MB: The MRC is developing an education program for Fraud and Payment professionals that are new to the industry, which is our biggest initiative over the next 12 months. We will be offering courses on Fraud, Payments and Chargebacks initially, which will give people a good fundamental understanding of the space and will set them up for success within their departments and companies. We are aiming to expand the program and offer additional courses after the initial launch, including advanced courses on the previously mentioned topics.