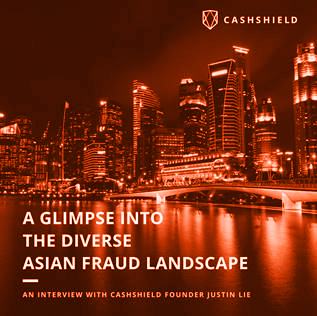 A Look into the Diverse Fraud Landscape in Asia

A Look into the Diverse Fraud Landscape in Asia, an interview with Justin Lie, Founder and CEO, CashShield.

How is Fraud different in Asia?

Fraud Landscape is different in Asia due to the unique context of the region as well as the presence of online syndicates here using the region as a testing bed for new hacking technologies.

Asia is markedly more diverse than North America and Europe. Unlike in North America where the US is by far the largest economic power, Asia consists of many more players, with China, India, Japan and ASEAN all flexing their wallets in online payments. Adoption rates across countries in the region are also not homogeneous- even in countries which share a border, such as China and India, credit card adoption rates vary widely. This issue is compounded by the lack of a central set of regulations governing online payments unlike in the EU. It is therefore difficult to treat Asia as a homogeneous unit, and a one-size fits all solution across the region is ineffective.

The geographical, legislative, and fundamental differences in Asia means that we have to approach fraud in the region sensitive to the unique Asian context. The lack of a central set of regulations and differing adoption rates means that Asia often plays host to online fraud syndicates, who, with an understanding of the local conditions, organize targeted fraud attacks on Asian countries with weak regulations but high credit card adoption rates. Hacking techniques such as website ransomware and DDOS attacks have all been successfully tested by syndicates in Asia by these local syndicates, before being brought to the rest of the world. Unique to Asia, merchants and platforms are often exposed to new threats and angles of attack. As such, fraud management solutions that have proven successful in Europe and North America often do not work in Asia, as they are not optimized to be flexible and learn in real time from the new threats.

Why are specific markets more risky than others?

Un-systemic fraud risks, stemming from the gap between credit card adoption rates and regulatory sophistication, differentiate risks among countries. As countries such as Thailand and Pakistan in Asia see a rise in credit card adoption and penetration rates, there is a potential for a lag in the sophistication of existing cyber-security infrastructure and regulations. Fraud syndicates exploit this gap to full effect.

What is the best option to prevent fraud in such markets?

The best option to prevent fraud in such markets is to have a solution that is scalable and able to adapt to fraud patterns in real time.
Traditional rule based and manual review systems are too slow and ineffective. Fraudsters are unconstrained by rules and automate the fraud cycle to achieve a speed that manual reviews can never match. They are therefore able to adapt in real time discover new weaknesses that merchants employing traditional methods are unable to secure in time. A solution that matches the speed and efficiency of fraudsters, using full machine automation and AI neural networks to analyze multiple data sets, gives merchants the leg up over the competition. Such a solution can grow seamlessly with a company, securing its profits and revenues as it moves from operating locally to regionally and beyond.

Why is it important to have a solution that has deep expertise in Asia?

Due to the diverse landscape in Asia as well as the border less nature of online activity, it is insufficient to simply rely on a partner that does not focus on Asia. Instead, a solution that is trusted regionally is preferred as it will be able to draw upon insights from its portfolio in Asia and beyond, working in real time to see patterns in fraudulent behaviour on a macro-level. In order to achieve this helicopter view on fraud, a platform that fully automates the fraud management process becomes critical due to the sophisticated degree of sensitivity to micro-changes.